skip to main | skip to sidebar

My boys are in Scouts. The annual Blue and Gold Dinner's theme this year was "S'more Fun" and included a cake contest. One of the categories was "I Want to Eat That". I researched S'mores cakes on the Internet and came up with this original and quite literal creation. 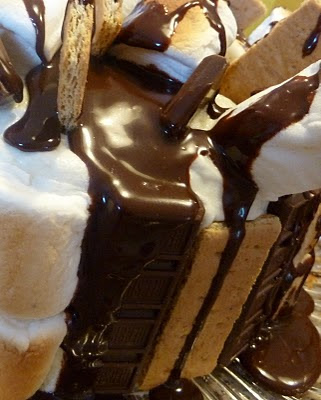 In addition to the multitude of ingredients listed in each section below, you'll need marshmallows, graham crackers and snack sized Hershey's bars to decorate the cake.

Yellow Cake
I used a mix but any good yellow cake recipe or mix will do. Mix according to directions for your chosen cake. Leave batter in the mixing bowl until the next step.

Generously grease, butter or spray with cooking spray two cake pans. Do not flour. Press crumbs into the bottom of two round cake pans. Bake for 5 minutes @ 375 degrees. Let cool. Pour in cake batter. Bake as directed by your chosen recipe. (I put a cookie sheet filled with water on an oven rack directly below the cake pans to keep the Graham cracker crusts from burning. I don't know if it was necessary but it didn't hurt.)

Let cakes cool completely in pan. If your cake layers mounded as they cooked, carefully slice off the tops of the cakes so that they are pretty much flat. Run knife along the sides of your cake pans to loosen the sides.

Here's where it gets tricky. You want to flip the cake out of the pan so that the graham cracker crust stays intact and is on the top of the cake at this point. I have a giant cake-sized spatula. 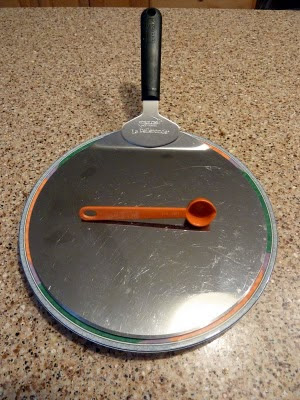 In a double boiler over hot, but not boiling water, combine chocolate chips, butter, and syrup. Stir until chips are melted and mixture is smooth.

OR melt chocolate chips in the microwave. Add butter and syrup. Stir until melted. You’re going to mess up a bunch of bowls anyway, why add to the mess with a double boiler? I just put that in there for the ol’ skool cooks.

Marshmallow Center
1 (7 ounce) jar marshmallow cream
3/4 cup confectioners' sugar, or to taste
3 tablespoons shortening (Using shortening rather than butter keeps the filling white-what can I say? I’m a purist)
1/4 cup half-and-half, or as needed (I used two tablespoons at max)

Place the marshmallow cream, two-thirds of the confectioners' sugar, shortening, and one tablespoon of the half-and-half in a mixing bowl. Beat with an electric mixer until smooth. Alternately add remaining confectioners' sugar and half-and-half until desired level of sweetness and consistency is attained. You want this to be a bit firm, definitely NOT runny, so go easy on the ½&½.

Spread on one layer of cake—the one NOT on the cake spatula. If you have leftover filling, you can add it to the frosting later.

You can use any vanilla frosting you like but we really liked this not-too-sweet frosting. I made a test cake and used a buttercream frosting and we all went into a sugar coma.

Cream butter, until very creamy Add milk & flour mixture and vanilla. Beat until thick and creamy (about 4 or 5 minutes). Taste-no, really this time. It’s delicious and not too sweet. That’s how it got its clever name.

Remove cakes from the refrigerator and freezer. Slide a knife underneath the frozen chocolate covered cake layer to loosen it from the giant spatula you went out and bought. I was able to easily flip it over and place it on the marshmallow filling. Good luck to you! Now you should have 7 layers:

I put the cake on the serving dish at this point. Frost the cake completely. Refrigerate while you toast some marshmallows.

I cut 8 marshmallows in half and placed the rounded side up on a greased up cake pan (cookie sheet will work, too). spread them out as much as possible. They will spread. Broil til browned. Watch constantly; it won’t take long and the time between ‘done’ and ‘burnt’ is seconds. Throw a bunch of whole marshmallows on a cookie sheet and broil them up, too. How many is up to you. I used 16.

Top the cake with more Graham cracker rectangles, Hershey bars and the whole toasted marshmallows. Refrigerate while you make the chocolate ganache. Did you think you were done?

Chocolate Ganache
5 ounces Milk Chocolate
5 ounces Bittersweet Chocolate
1 cup Heavy Cream
Break the chocolate into small pieces and place in a small-medium bowl—bigger than a cereal bowl and smaller than a salad bowl--you’re going to be stirring chocolate and hot cream. I’m a sloppy stirrer so I used a bowl large enough to hold my slop. Heat the cream until boiling. Pour over the chocolate bits, Stir until chocolate is all melted. Let cool until it is almost room temperature.

Pour ganache over center of cake. It will spread and, if you keep pouring, drip artistically over the side of the cake. Drizzle some ganache over the toppings on the cake. 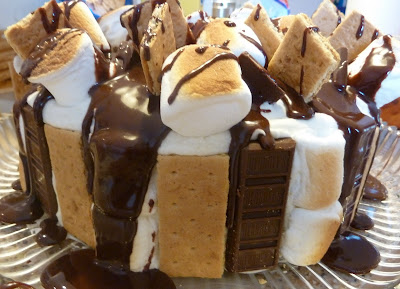 Posted by The Empress of Everything at 9:29 AM

I hate making things, too.
School lunches, beds, big messes.
The status quo.
This blog will not be these.